“A visit to a museum is a search for beauty, truth, and meaning in our lives. Go to museums as often as you can, and if the the museum is Vatican… it will takes your breath away.”

If you are a lover of Art then Vatican Museum is the perfect place for you to Die and to Live. Here is the list of Arts that were breathing over the centuries inside a grand Vatican museum.

If you love art you can’t absolutely miss the Pinacoteca: 18 rooms displayed in chronological order with paintings going from the Medieval age until the 19th century. A rich collection gathered by Pope Pius XI to reorganize a collection of paintings, previously belonging to different popes. Many of the works displayed were retrieved from Paris after the Congress of Vienna (1815) thanks to the intercession of sculptor Antonio Canova. 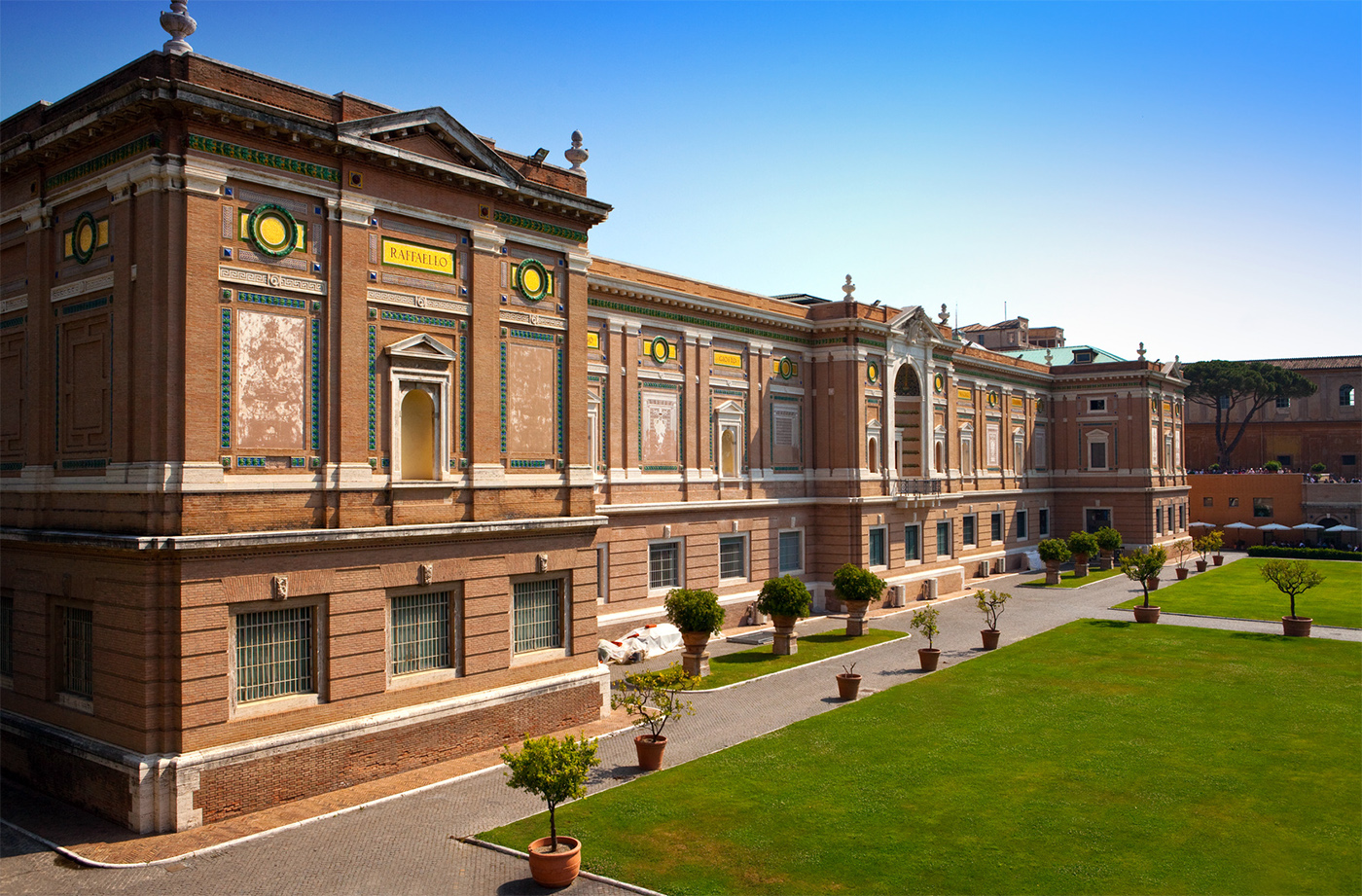 The building containing the Vatican Pinacoteca 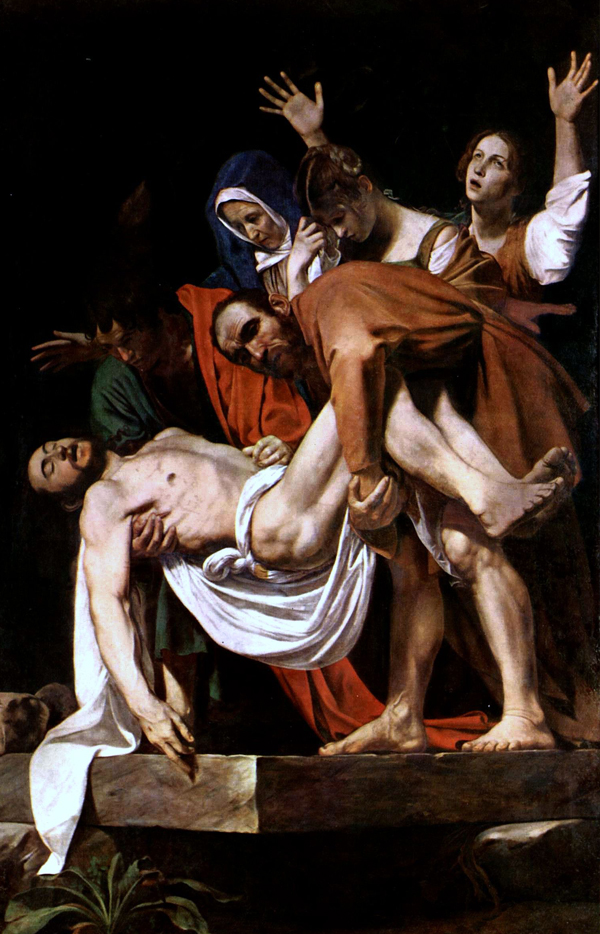 Caravaggio – The Entombment of Christ 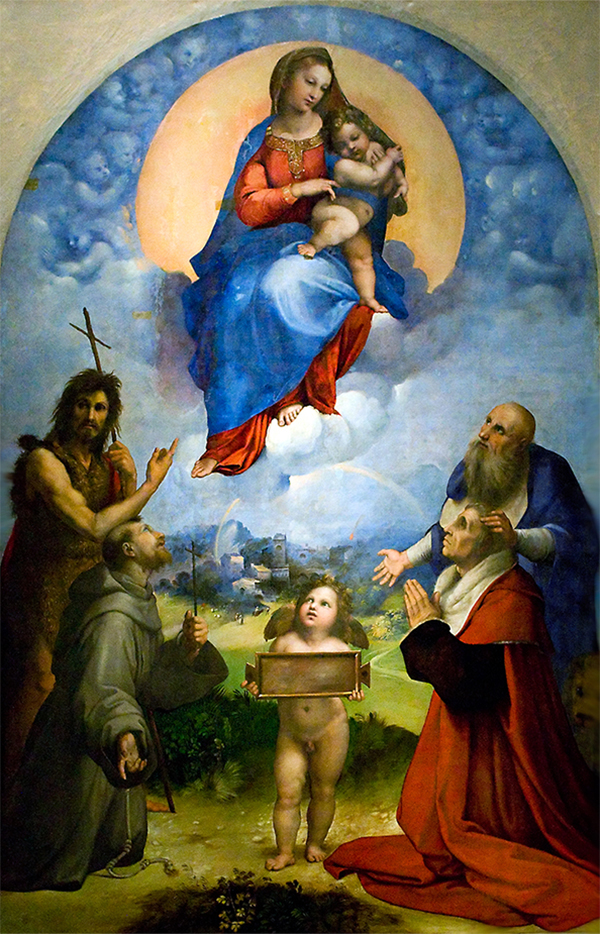 If you love sculpture, don’t miss the opportunity to visit the Pio Clementino Museum. Anyway, since it is the biggest complex inside the Museums you will easily notice it! The museum, founded by Pope Clement​ XIV in 1771, was expanded by his successor Pope Pius VI to host the most important Greek and Roman masterpieces kept in the Vatican.

The Museum is formed by 12 rooms and contains important Greek and Roman works of art. In the interior of the Gabinetto dell’Apoxyomenos, there is a Roman copy of a Greek bronze statue by Lysippus (aroud 320 BC).

The statue represents an athlete in the act of scraping sweat from his body after a competition with the small curved instrument that the Romans called a strigil. The figure represents a breech with the traditional frontality found in Greek art: to fully enjoy the sculpture, you must turn around it. The work is then considered the first all-round Greek sculpture.

In the Octagon Courtyard, among the most famous statues you can see the Apollo Belvedere, Roman copy of the 2nd century AD from a Greek original in bronze by Leochares (330-320 BC.), placed in the Ancient Agora of Athens. In here there is also the Laocoön sculpted group, Roman copy of the 1st century AD. from a Greek original in bronze from the 2nd century BC, found in Rome on the Esquiline Hill in 1506, and bought by Pope Julius II, and Perseus with the head of Medusa by Antonio Canova (1800-1801). 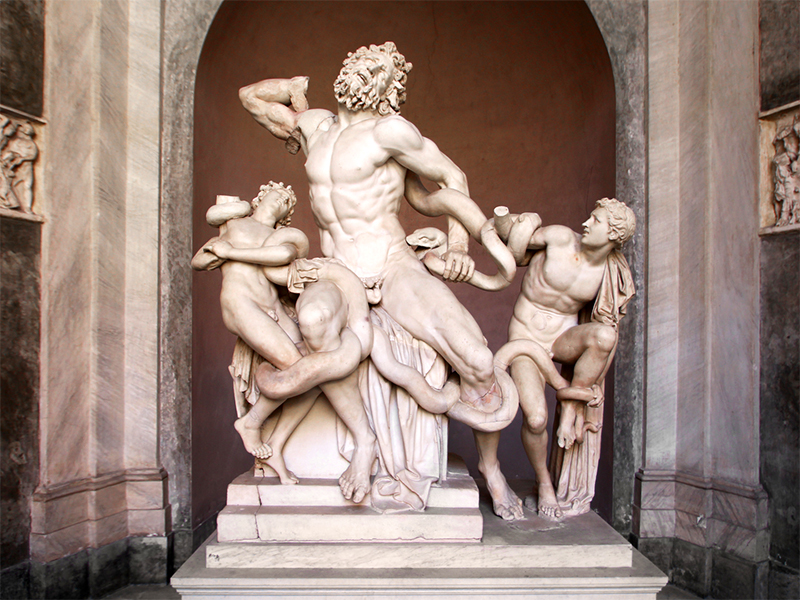 If you love antiquities, the Gregorian Egiptian Museum is right for you! Founded on the initiative of Pope Gregorius XVI in 1839, the museum is formed by 9 rooms and it gathers monuments and finds of Ancient Egipt, partly coming from Rome and Villa Adriana (Tivoli). Instead, the last two rooms contain works from Ancient Mesopotamia and Assyria. 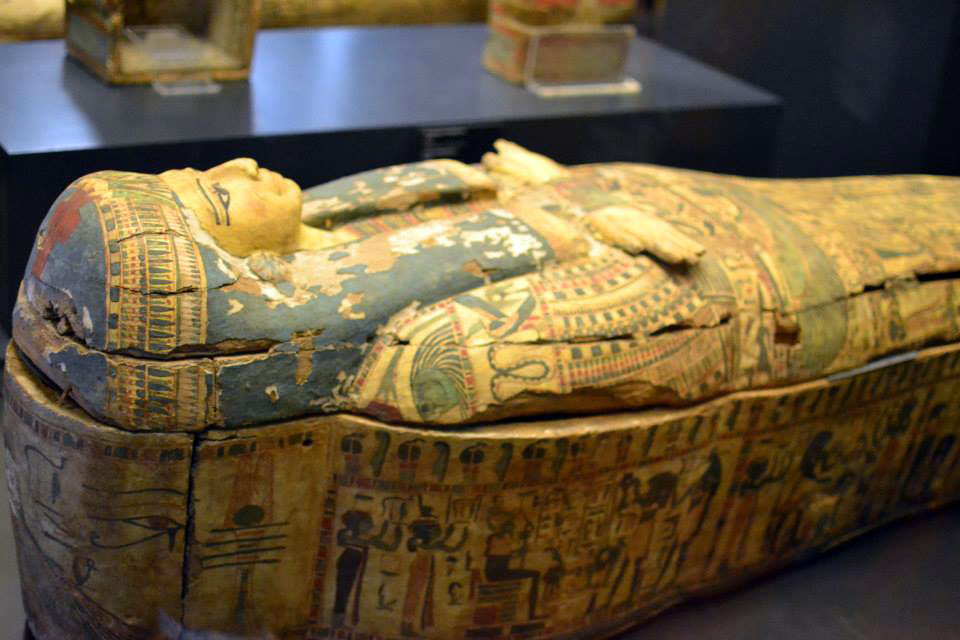 A precious coffin in the Gregorian Egiptian Museum

Mummies are beyond doubt the main attraction that you can find inside the Egiptian Museum.

The coffins, made with sycamore wood, present very fine pictorial decorations. Some of them belong to the XXII dinasty (930 – 800 BC).

Among the most interesting sculptures, we find the head of Pharaoh Mentuhotep, king of the XI dinasty, who is considered the actual founder of the Middle Kingdom of Egypt and unifying king of High and Low Egypt, and the Tjuyu, colossal statue made with dark granite representing the wife of pharaoh Sethos I, mother of famous Ramses II.

If you love history and gegraphy, along the itinerary leading to the Sistine Chapel, you will fnd the suggestive Gallery of Geografic Maps, beyond doubt one of the brightest and most fascinating environments within the Vatican Museums. The gallery is named after the series of topografic maps comissioned by Pope Gregorius XIII painted on the walls by Perugian Ignazio Danti. Italy is seen as divided in two by the Appennines: on one side are the regions standing on the Ligurian and Thyrrenian coasts and, on the other side, the regions standing on the Adriatic coast.

The perspectival views of the main Italian ports of the sixteenth century complete the series of geographical maps. Among them Venice, Ancona, Genoa and last but not least the Port of Civitavecchia. 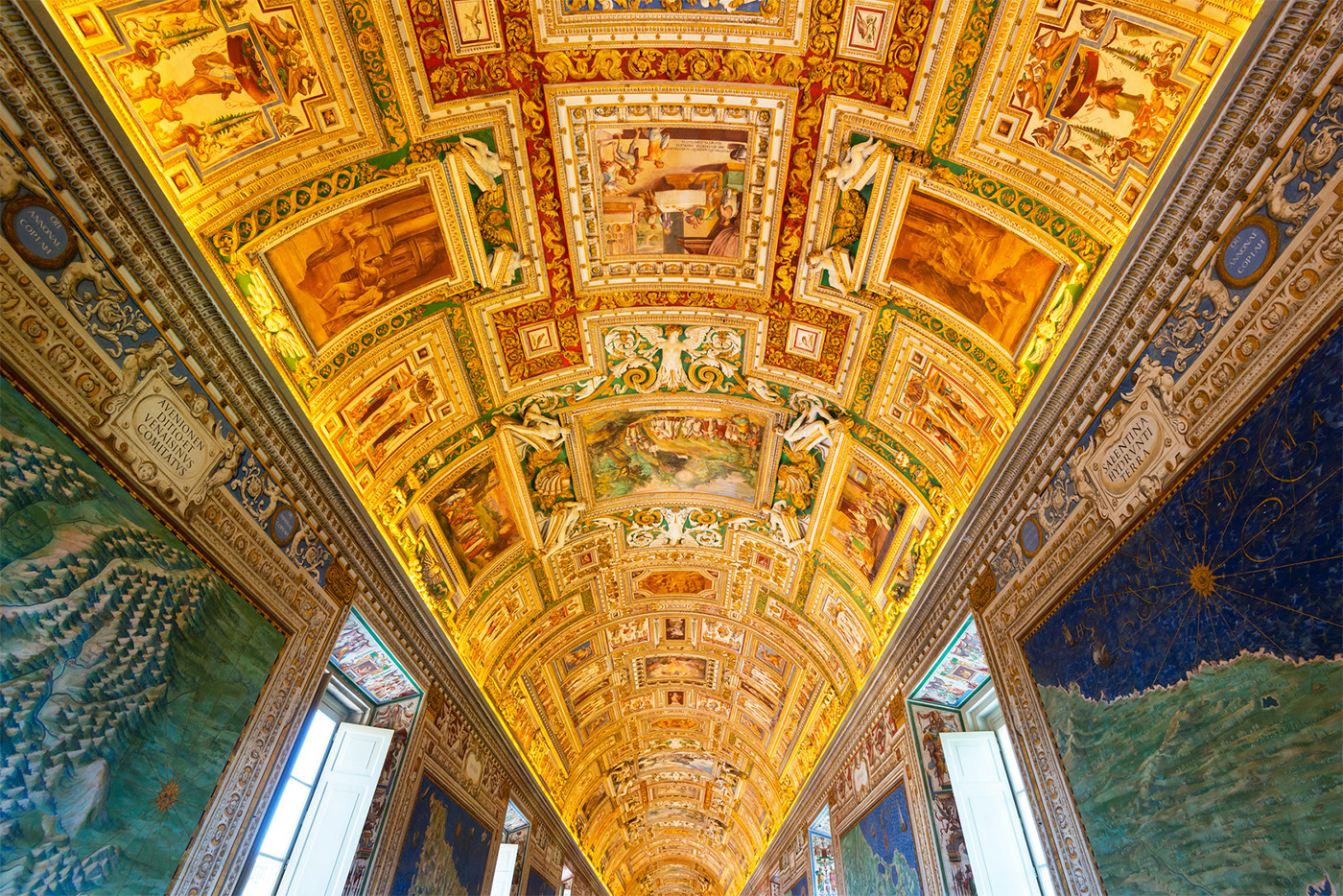 5. THE PAVILION OF THE COACHES

For the most curious and for all of you passionate about historic vehicles, in the Papal Appartment in the Palazzo Apostolico del Laterano, in a separated section of the Historic Museum there is the Pavilion of Coaches.

Created by Pope Paul VI in 1973 and fitted out in a vast place under the Square Garden, it preserves coaches, cars and sedan chairs used by various popes. Among curiosities, in addition to the nineteenth-century coaches, there is a scale model of the first locomotive of the Vatican City (1929). Worth noting, specially, the Full-dress Sedan built for Pope Leon XII and used until Pius XI. 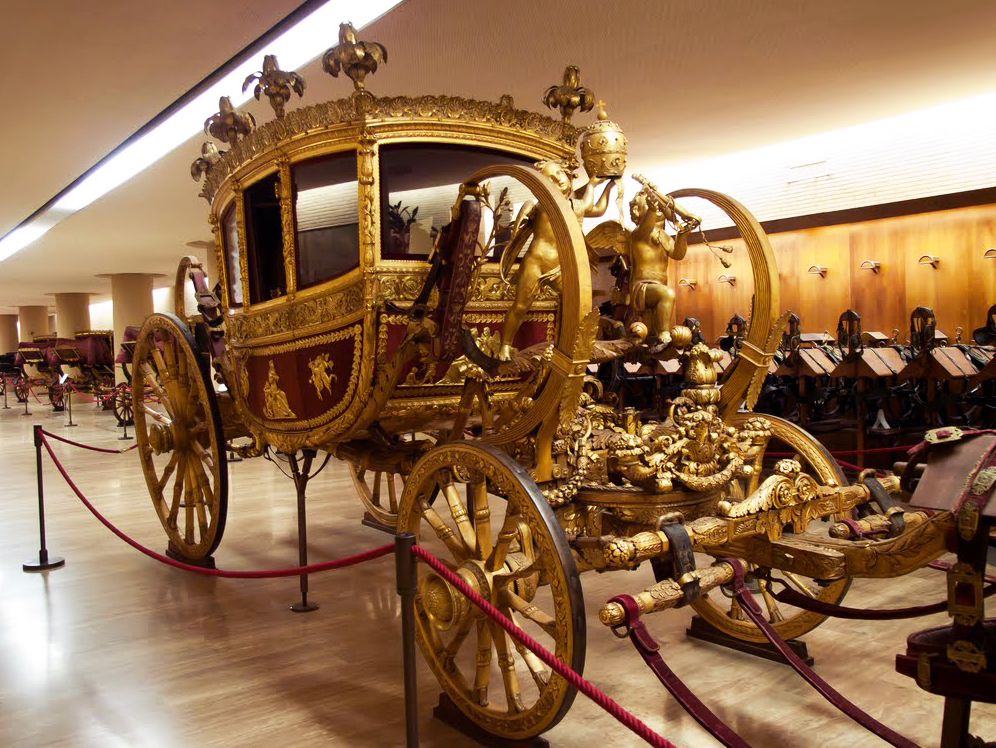 A nineteenth-century Popemobile in the Pavilion of the Coaches

Probably ranking second, only after the Sistine Chapel, Raphael’s Rooms are beyond doubt one of the main attraction in the Vatican Museums. The rooms used to be part of the private apartments of Pope Julius II, who entrusted the frescoes to Raphael. The painter from Urbino, worked on them from 1508 to 1520, the year when he died, and thereafter his pupils took on the works until 1524.

Doubtless, the most famous room is the Stanza della Segnatura (“Roo of Signature”) housing the private library of Julius II. In here, there are four frescoes representing the four main themes of knowledge: Disputation of the Holy Sacrament (Theology), The School of Athens (Philosophy), The Parnassus (Poetry) and The Cardinal Virtues (Law).

The School of Athens by Raphael Sanzio

The second room made by the artist is the Stanza di Eliodoro (“Room of Heliodorus”), painted between 1511 and 1514. In here, the spiritual and temporal power of the Church is exalted, with interventions by God in favor of men. One example is the The Expulsion of Heliodorus from the Temple: the scene represents Heliodorus of Antiochia, flogged by angels while he was trying to profanate the temple of Jerusalem.

The other rooms, where the interventions by Raphael’s pupils are more evident, are the Stanza dell’Incendio di Borgo and the Sala di Costantino.

The Expulsion of Heliodorus from the Temple – Raphael Sanzio

This amazing helical spiral staircase is located at the end of the itinerary and leads you outside the Museums. The staircase was designed by Giuseppe Momo in 1932. It is a staircase with a double helical spiral: on one ramp you go up and on the other you go down. Once you have gone downstairs, try and look up and you will be astonished by the perspective. 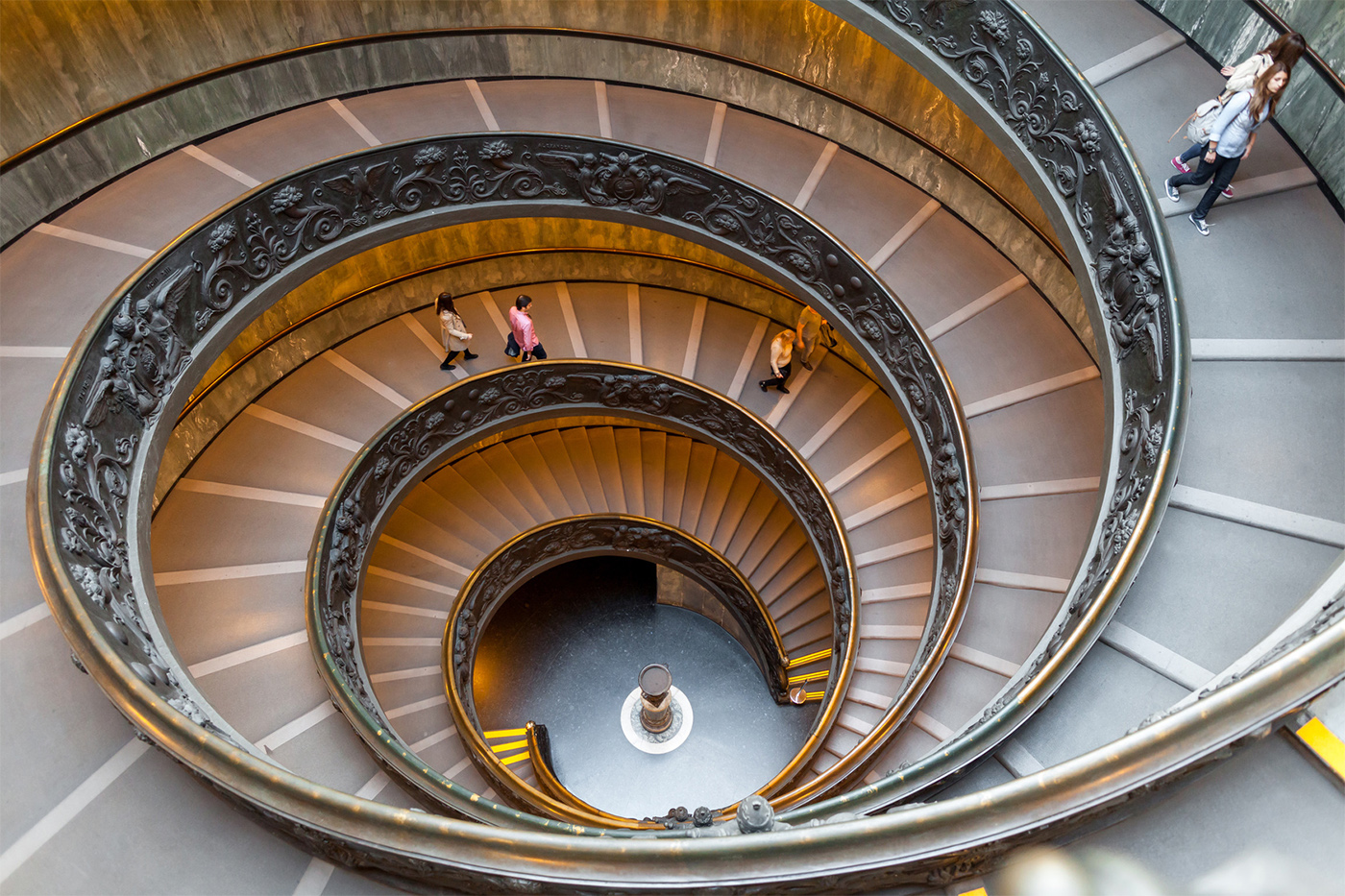 “The best introduction to art is to stroll through a museum.
The more art you see, the more you’ll learn to define your own taste.”