The Sistine Chapel is a large chapel in the Vatican City. It is renowned for its Renaissance art, especially the ceiling painted by Michelangelo, and attracts more than 5 million visitors each year.

Painting the Sistine Chapel was an exhausting task, and Michelangelo’s relationship with the Catholic Church became strained doing it. Perhaps to depict his unhappiness, he hid two miserable-looking self-portraits in “The Last Judgment. “He painted his deceased face on Holofernes’ severed head and his ghoulish visage on Saint Bartholomew’s flayed skin.

At the highest part of the ceiling, Michelangelo depicted nine scenes from Genesis, including “The Separation of Light From Darkness” at the altar end of the chapel to “The Drunkenness of Noah” at the other end. The most famous panels are “The Creation of Adam” and “The Fall of Man and the Expulsion from Paradise.” Images of prophets and pagan sibyls surround the panels, and twisting (and originally controversial) male nudes decorate the corners.

This fresco depicts the second coming of Christ, who is judging all mankind. The blessed are on the right and heading to heaven, while the damned are on the left and being sent to hell and tortured by demons. Major Biblical and Catholic characters appear in the scene, including Eve and several saints.

Michelangelo’s self-portrait takes the form of flayed skin. One of the many figures in the Last Judgement painting on the altar wall is St Bartholomew, who was flayed alive. The saint holds his own skin, which is commonly interpreted as the artist’s own melancholy portrait. On your Vatican tour your guide will show you other fascinating details in Michelangelo’s frescoes, and tell you the story behind the painting.

A serious restoration of the Sistine Chapel began in 1980. Restorers spent 14 years reattaching fresco and cleaning it. They also removed some of the “modesty drapes” that had been added to Michelangelo’s work.

There may be a hidden brain in The Creation of Adam. The shape created by the angels and robes surrounding God bears an uncanny resemblance to the human brain, complete with stem, frontal lobe and artery. Given Michelangelo’s anatomical studies, it’s unlikely to be coincidental. And on the subject of anatomy – if Adam didn’t have a mother (and therefore an umbilical cord), why does he have a belly button?

The chapel is more than an artistic masterpiece; it is a place of crucial religious activity.  Since 1492, the chapel has been the site where the College of Cardinals gathers to elect a new pope.  The chapel has a special chimney that is used to broadcast the cardinals’ voting status. White smoke indicates that a new pope has been elected, while black smoke signals that no candidate has received a two-thirds majority.

Perhaps unsurprisingly, Michelangelo didn’t enjoy his work. He suffered from backache while painting the Sistine Chapel, and even wrote a poem lamenting his suffering. 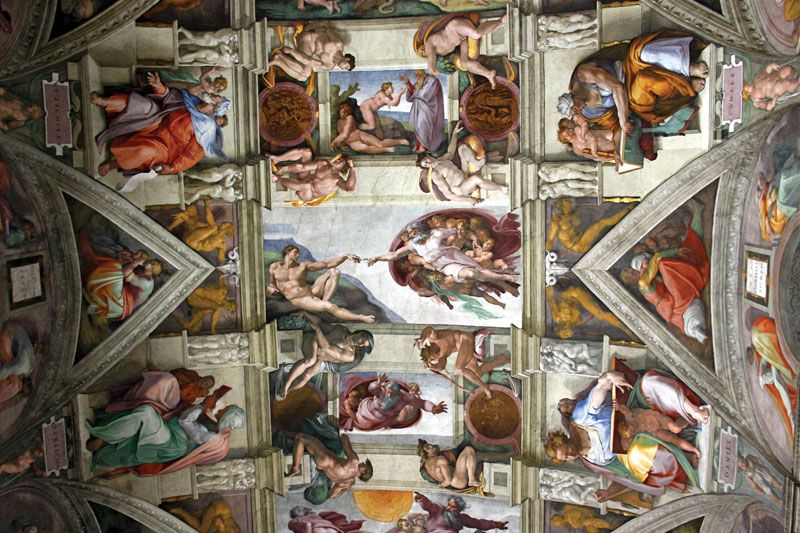 Michelangelo designed God. The stereotypical depiction of God as a wise old man with long white hair and a beard can be traced back to the ceiling of the chapel. Before Michelangelo, God was usually depicted as a hand coming down from the clouds, and this was the first time God had been depicted in such a dynamic way.

The nudity in the paintings was controversial. Although we may be used to seeing a lot of nudity in Renaissance art, Michelangelo’s paintings in the Sistine Chapel were considered pretty risque at the time. The Papal Master of Ceremonies complained that “it was mostly disgraceful that in so sacred a place there should have been depicted all those nude figures, exposing themselves so shamefully”. After Michelangelo’s death, the painter Daniele da Volterra was commissioned to cover up the genitals with fig leaves and loincloths, earning him the nickname “Il Braghettone” (“the breeches maker”).

You can’t take photos. No ifs, no buts. While you can take photos in the rest of the Vatican Museums, in the Sistine Chapel it’s strictly forbidden, for reasons that have more to do with copyright laws than protecting the paintings. But rather than risking the wrath of the guards by trying to take a sneaky photo on your phone, forget about photos and use your eyes. When we’re sightseeing we often feel the pressure to take photos, but it can distract us from enjoying the moment. Look on the positive side – if you can’t take photos, all you can do is focus on the masterpiece in front of you.

In 1990, some physicians suggested that the flying-seat shape and figure of God in “The Creation of Adam” makes up an anatomically correct image of the human brain. In 2010, it was asserted that “The Separation of Light From Darkness” panel contains a human brain stem. Other theorists have suggested that Michelangelo depicted kidney imagery on the ceiling.  As a sculptor, Michelangelo was fascinated by the human form. He studied cadavers to get a better sense of anatomy, and would have been familiar with the human brain.

When you’re a kid and someone’s an artist, you think of Leonardo da Vinci. You don’t think that’s a job; you just think of a man with a beard painting the ceiling of the Sistine Chapel.